How to Find Scale Patterns That Work For You 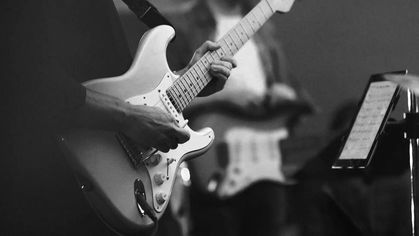 Nowadays, I play in fourths tuning (EADGCF) around 75% of the time because I love it, and the rest of the time I use standard (covers gigs, teaching, etc.) because it’s just more practical. However, one of the things I miss about standard tuning when I’m in fourths is the sheer variation of scale patterns available on a non-symmetrical fretboard. Ironically, this was one of the things that used to annoy me about standard tuning, but I’ve come to see it in a different light. If you’ve ever learned those clunky 3NPS or CAGED patterns and not felt you were really able to make music with them, read on…

Some scales, such as the pentatonics, fall under our fingers nicely and we’re able to make sweet music with them, while others such as the aforementioned 3NPS or CAGED shapes just don’t lend themselves well to phrasing. It was the late, great Eric Roche that opened my eyes to this at music college. His ‘standard’ tuning was DADGAD, which really doesn’t lend itself well to playing scales in a linear fashion, so what he would do was to incorporate open strings with one or two notes per string to create scales that rippled up the fretboard and sounded fantastic. We’re not going it take it those extremes during this lesson, but it’s something that’s well-worth looking into, especially if you play acoustic guitar in altered tunings.

I really like this next pattern because it seems to lend itself well to more musical phrasing. Try it out.

Here’s another one that frees up your fingers and forces you to move horizontally; add some slides and bends to this one and it’ll sound great.

Here’s one that you can start on your fourth finger with the notes falling nicely so that you can use one finger per fret.

Here’s another pattern you can start on your fourth finger; in fact, if you study it closely enough, you’ll see it’s the exact same pattern as the previous one, only warped by the fretboard – more on that here. This one is very usable because it feels like box one of the minor pentatonic scale.

How about this 4NPS (four-note-per-string) pattern. In this part of the fretboard the stretch isn’t too much and you’re sure to come up with some interesting ideas.

To finish up, here’s an obvious pattern but it’s a useful one again because it allows you to assign one finger per fret and cover all the notes.

The takeaway here is that while learning two or three-octave patterns across the fretboard makes for a good technical workout, it needs to be balanced out by zeroing in on these kinds of patterns in order to make music with the scale. This way, you’re dealing with a small enough amount of information to start to notice the details such as the intervals you’re choosing and perhaps even the note names.