How to Solo Over Chord Changes (Part 7) 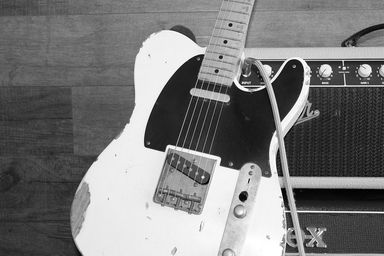 You might be feeling somewhat overwhelmed at this point, so it would be a good idea to take a breather and take stock of what we’ve learned so far about soloing over chord changes.
3 Things to Realize
The first thing to realize is that you don’t have to play ALL the chord tones over every chord because a) they weren’t created equally, and b) the 3 and 7 will almost always be the defining notes in the chord, and these are contained in our base sequences.The second thing to remember is not to try to memorize anything because the process of finding chord tones is what you want to practice – however long it takes – not the memorization process. In other words, you want to get better at finding chord tones rather than chastising yourself because you don’t know where they are.

The third thing is not to feel intimidated by chords with long names because you can always reduce their interval structure to one of the base sequences, or simply find the 3 and 7; either way it’ll sound like you know what you’re doing.

The Role of the Root Note
This is a tendency that’s usually developed from playing scales or running patterns that inevitable start on the root note. When it comes to soloing over changes, you’ll want to give less weight to the root note because either the bass player (or another instrument) will be playing it. It’s important to have the location of the root note in your mind’s eye, but it’s not one of the intervals you’ll want to emphasize a lot in the beginning. It’s more useful when you start playing outside lines due to the strong resolution, or if you happen to get lost, you can always go back home.

Fretboard Anomalies
We’ve been mapping out intervals in the middle of the fretboard, so now it’s time to take a look at what happens when we move into the warp zone, as I like to call it. The warp zone is the major third distance between the G and B strings on a guitar in standard tuning. This offsets everything by one fret, which in my head looks something like this:

Basically, if you’re searching for intervals from the G string to either the B or E strings, you’ll need to move everything up one fret. Here’s one of the diagrams we’ve already used but shifted into the warp zone:

In other words, everything in the red box is shifted up a fret due to the nature of standard tuning. In fact, this affects pretty much anything you apply to that area of the fretboard be it chords, arpeggios, scales and intervals as seen here. Once you realize this and start to become aware and make the mental shift, it ceases to become a problem. Another solution would be to tune to all fourths of course!

Incidentally, if all your intervals fall inside the warp zone (the red box), the regular rules apply. It’s only when we cross into it from any other string that everything gets shifted up one fret. Check out the following diagram:

Our base patterns are unaffected by the warp zone because they are restricted to one string.

In Part 8, we’ll look at 13 chords and their respective intervals, as well as tackling a common jazz chord progression.