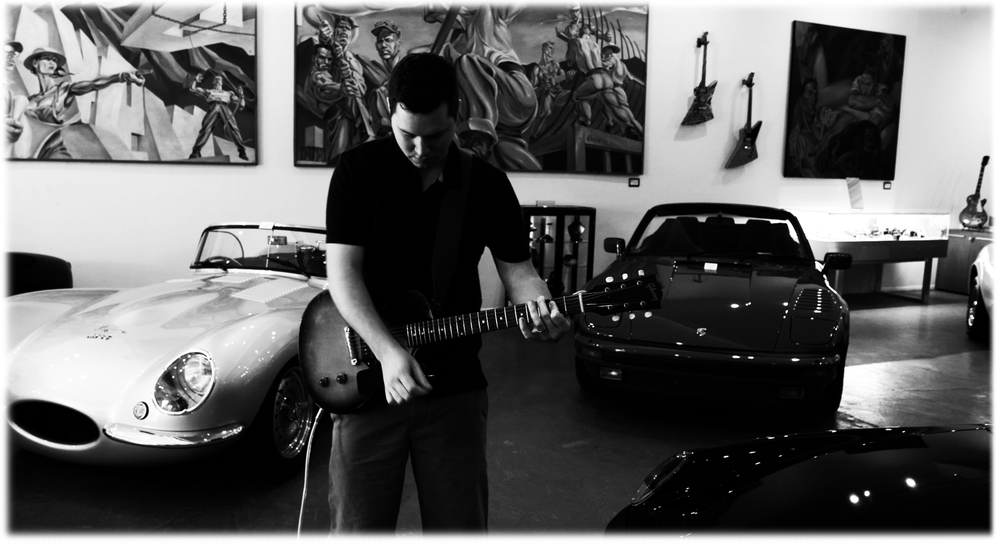 Back in May last year we reviewed Level 1 of Tyler Larson’s Guitar Super System Course, which is an interactive program based on the syllabus from the world famous guitar curriculum at Berklee College of Music, of which Tyler is a graduate; one level of Guitar Super System being the equivalent of one semester at the aforementioned breeding ground for talents such as John Scofield, Mike Stern, John Petrucci and John Mayer, to name just a few. Anyone who’s ever been, or thought about going to Music College will be well aware of the hefty price tag involved, but what if you could glean all that priceless information from the comfort of your own PC, and at a mere fraction of the price? This is where Guitar Super System comes in, and its creator, Tyler Larson, was kind enough to talk to us about the course, and the release of Level 2.

Matt: What was the inspiration for Guitar Super System? Did you come up with the idea for it while at Berklee, or after graduating?

Tyler: I came up with the idea a few years after I graduated from Berklee. I was on a plane traveling to watch the finals of the Duke Start-Up Challenge in New York with my colleague and friend Damien Hoffman, so I was in an entrepreneurial state of mind. The idea for converting each semester of the Berklee guitar curriculum into video format came to me while discussing the ridiculously high dropout rate of 80% at Berklee. I thought if students had a way to practice the material using a modern method like video, it would be helpful to them. I pitched the idea to Berklee as a supplemental asset to the institution, but they weren’t interested. It was at that point I decided to increase the production value and cater the lessons to people who are aspiring music students, or guitar players who want to learn more about their craft but may not have the means for college-level education. My favorite book about Texas Hold ‘Em, Poker Super System by Doyle Brunson, is what inspired me to name my series, “Guitar Super System”.

Matt: Let’s go back to the early days, tell us a little about what made you first pick up a guitar and want to learn to play.

Tyler: There were two moments in the same day that both instilled the same “What the **** is that?” feeling in me. I was sitting in my late Uncle Jim’s basement when I was about 11 years old. I was perusing his CD collection and found Ah Via Musicom by Eric Johnson. I don’t know what compelled me to play it; maybe it was the artwork, maybe the cool album title. When I heard Cliffs of Dover, I listened to it over and over. After I got my fill, I discovered Van Halen’s Eruption, which happened to come up on shuffle in my uncle’s Windows Media Player application on his computer. I guess you could say a lot happened to me on that day back in 2001. Thanks, Uncle Jim!

Matt: When did you decide to get serious and go to Berklee?

Tyler: I was about to go to college to be the field goal kicker on a football team. I had grown up playing sports and was a soccer player turned football kicker for my high school team, which won the New Hampshire state title three years in a row while I was there. We only had one loss while I was part of the team, and it was when I couldn’t convert a field goal against our rivals in the regular season of my senior year. It was one of the worst feelings of my life, and it caused me to do some self-examination. I never felt any pressure or negativity when I was playing music; it was quite the contrary. Music was what got me out of those dark places. Being surrounded by amazing athletes at my school, it was my guitar skills (if you call guitar skills wanking through the pentatonic scale when you’re 17 years old) that set me apart and made me wonder how far I could go. I learned “Friends” by Joe Satriani for my audition song, drove to Boston in the winter of 2006, and was assessed by one of the guitar instructors in my entry audition. It was one of the most memorable experiences of my life. As a side note, studying to become a professional guitar player sounded a lot cooler than freezing my ass off in upstate New York as the kicker at some random college while studying political science.

Matt: Is Guitar Super System exactly what you’ll get at Berklee, or did you make any changes to the syllabus?

Tyler: Guitar Super System is exactly what you’ll learn at Berklee as a guitar player, and then some. Berklee designs their curriculum in levels. At the end of each semester, no matter what your instrument, you are required to pass what is called a “proficiency exam”. This exam is based 100% off a piece of paper given to you at the beginning of each semester, and it is very nerve-racking, which is why I think a lot of students struggle. Guitar Super System takes what is on that paper and deciphers it for you, section by section. On top of teaching each section of information, I add in extra explanations where I feel it’s necessary. For example, instead of just presenting the different inversions of a triad on various string sets, I add contextual videos to explain just what a string set is, how to identify intervals, and how to construct a triad in the first place. These things would normally be taught to you in your private lessons or Harmony classes at Berklee. I include these nuggets of knowledge so any guitar player can move forward through each level of Guitar Super System without any initial background in music theory. It’s helpful if you’re familiar with basics like knowing the third fret of the A string is a C, but you can really start from scratch if you’re motivated to do so.

Matt: I really like the way the course is laid out and presented in bite-size chunks with videos, pdfs and backing tracks; it makes the information very manageable. At Music College, I remember the sheer amount of information being simply overwhelming, did you figure this kind of ‘information management’ or learning curve into the way you designed the course?

Tyler: To expand on my answer from the previous question, I think that overwhelming feeling of stress you’re describing is something every higher education music student experiences at one point or another. I am a very meticulous person; everything has to be in its right place for me to get anything accomplished. I love breaking large goals into subtasks and measuring my progress visually. I believe understanding and applying every facet of a concept is the only way to truly internalize it, and this is the exact frame of mind I used to create Guitar Super System. This course is not meant for virtuosos. It’s meant for the other 99% of us.

Matt: I really enjoyed Level 1 of Guitar Super System, and in Level 2 it seems you’ve taken the production up a notch. What else can we expect from Level 2?

Tyler: I’ve optimized the structure of applying each concept through backing tracks and demonstrations, as well as added more optional explanations to accommodate students who might learn at a faster or slower pace. Regarding format, you can expect every level of Guitar Super System to be organized in the same five sections: Scales, Triads, Chords, Arpeggios, and Extras. Within each section you will find slightly varying materials based on what I feel is necessary for a student to completely master a given concept. The technical side of production has seen a notable increase, too. I have gained extensive filming experience with my entertainment website called Music is Win, as well as made some notable upgrades to the equipment I use.

Matt: Both Level 1 and Level 2 of Guitar Super System cover a hell of a lot of ground right from simple triads through to complex chords and arpeggios as well as the modes of the major scale and the melodic minor scale. Can you give us a sneak preview of what will be in Level 3?

Tyler: In Guitar Super System Level 3 we will dive into the Harmonic Minor scale, as well as another super secret scale that will turn your blues solos into mind bending fusion freak-outs. We’ll also get into spread voicing triads, which are the epitome of awesome. There will be more crazy chords, arpeggios, and extras, and most importantly, the means to apply all these things to your own playing. Anyone can try to teach you a concept, but it’s no fun just running scales and memorizing shapes. The real joy of playing an instrument comes when you’re expressing yourself, and the lessons you learn in Guitar Super System will unlock new areas of your playing and invigorate you as a musician. Guitar Super System is not a replacement for a Berklee College of Music degree, but as far as the guitar part of that degree goes, it’s pretty damn close.

About Tyler
Tyler Larson (born May 30, 1989) is a musician of many influences. With over fifteen years experience playing the guitar, Tyler has appeared on several studio albums, performed with many diverse artists, and studied with some of the most renowned guitarists on the planet, including Joe Stump, Dave Fiuczynski, Tomo Fujita, Dave Tronzo, Jon Finn, and others. Tyler began his career as a professional musician, and in 2015 Tyler founded a website called Music is Win which has become a rising force in the entertainment and music space, with his videos amassing over 2 million views to date. Tyler’s online courses have thousands of students enrolled with a cumulative five-star rating. Tyler is an entrepreneur in the media technology space and lives in Asheville, North Carolina.