10 Tips to Teach Yourself Guitar Effectively 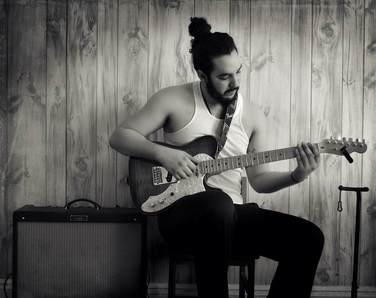 Out of the 20 something years I’ve been playing guitar, I’ve had lessons for about 3 of those, so I’m largely self-taught, which is probably why you’ll find all kinds of unorthodox stuff on this blog to try out. On the other hand, for the three years that I did receive formal lessons, I was spoilt beyond belief with lessons from Guthrie Govan, Dave Kilminster, Eric Roche, Pete Friesen, Mike Goodman, Tristan Seume, Jamie Humphries and my very first guitar teacher, the amazing Steve Dodds. Truth be told, they collectively provided me with lifetimes worth of insight but I was always inclined to want to figure things out on my own, so here are ten or so tips for those of you who are also on the self-taught path.

1. Watch the Pros like a Hawk
You probably don’t realize the amount of visual information you absorb when you watch someone play guitar. Watch a variety of guitarists and pay attention to EVERYTHING; how their fingers move, the way they pick, right down to the tiniest nuances of their playing. Your brain will process this information and use it to self-correct your own technique. I remember focusing intently on Guthrie Govan’s right hand day after day – it’s truly a well-oiled alternate picking machine with an absolute mastery of economy of movement, but not something that I could easily replicate which lead me to study other players’ picking techniques in detail, try them all out, and eventually find my own. I believe you can learn virtually any technique this way if you pay enough attention to what a player is doing.

2. Be a Hunter-Gatherer
When I wanted to learn something, let’s say triads, I would hunt and scavenge for all the material I could find on the subject, print it out if necessary, and pore over it until something clicked. When it comes to learning something on guitar, there’s always more than one way to skin a cat, and people learn in different ways. Taking triads as our example again, you may want to come at it from a visual perspective with fretboard diagrams; you may want to know how triads are constructed and the theory behind them, or you may want to learn them in the context of a song. Whichever way you want to approach it, you’ll need a variety of material at your disposal.

3. Organize Your Practice Material
This follows on from the last point as you’ll start to build up a pile of resources to work from, and you’ll want to keep this pile as organized as possible. I suggest dividing your findings into different folders such as: scales, chords, triads, picking, songs, etc. This way you have easy access to your practice material, and you won’t be wasting time rooting through a bunch of papers to find what you want.

4. Play with Others
As learning experiences go, playing with others will fast-track your progress like nothing else mainly because of two things; a) you’re putting into practice everything you’ve learned in the woodshed, and b) you’re learning all the interactive and communicative skills you can’t practice by yourself. Wherever possible, play with people that are a little above your level and you’ll find yourself raising your game; play with people that are more than slightly below your level and you’ll find the opposite is true.

5. Hang Around with Bass Players or Other Musicians
When I went to music college back in the early 2000s, I discovered that one of the most unproductive things I could do was to hang around with other guitarists, bar very few exceptions. By nature, guitarists are kind of protective of what they’ve learned or how they do things in a very invidious way and tend to see everything as a competition, whereas other musicians such as bassists, keyboard players and singers generally have far fewer hang ups when it comes to sharing knowledge. Plus, if you hang around with bass players, they’ll inevitably know drummers and you’ll have access to a rhythm section. Guitarists, on the other hand, all want to solo, so it’s unlikely you’ll find one who’s just willing to play chords. If you want anything to do with music theory explained to you, bassists and keyboard players are a great source of knowledge. Guitarists tend to hack together information from different methods, usually guitar-only methods such as the CAGED system, and can only provide half-assed explanations for theory concepts.

6. How to Choose Your Material
As I mentioned earlier, you’ll want to find material that works for you based on the way YOU learn. There are various tests you can take to find out whether you learn best visually, by doing, or with your ears. I discovered early on that I wasn’t a visual learner and began exploiting the sense I learned through best such as my ears and book-studying concepts and theory. If you don’t learn best visually yet all your learning material is visual, progress will be very slow.

7. Find a Mentor Not a Teacher
Great guitar teachers are hard to find. This is mainly because most players do it as a sideline to pay the bills while they’re going after better gigs. If your teacher is one of these guys or gals, chances are they won’t be committed to your learning and will most likely feed you information and expect you to churn out the results on your own with little actual teaching going on. What’s missing is the insight that a great teacher provides which is why I would suggest seeking out a mentor you can get together with once in a while to shoot the shit and play guitar. A good mentor won’t explicitly teach you something, but what they will do is transmit insight and knowledge based on their wealth of experience. A mentor could be a well-known local player who’s willing to take the time every now and then to see how you’re progressing.

8. Work Towards Something
When you’re teaching yourself guitar, motivation and discipline are fundamental to progressing on the instrument. To avoid unproductive practice sessions, it’s a good idea to have something to work towards, be it your next gig or jam session, writing a song or an album, tackling a difficult piece, getting a band together, working on your repertoire, or even creating material to teach others; that little bit of pressure will keep you motivated and away from procrastination and mindless noodling.

9. Develop Your Ear
Great guitarists have great ears; there are very few exceptions. Your ear is the glue that holds all the other aspects of your playing together, and will drive you forward as a player if you practice regularly. Most guitarists are suspicious of ear training and see it as merely decorative, but it should be part of your daily practice routine as in the end, it has the power to either make or break you as a player. Most ear training programs tend to focus on identifying random tones or random pairs of tones in isolation which, in real life, you don’t actually do. Virtually all music has a context which is why learning intervals in isolation won’t help you transcribe or work things out by ear. What you need to do is either transcribe on a regular basis, or get the (FREE) Functional Ear Trainer app which, as far as I know, is the only ear training program that has you learning intervals in a musical context (cadences), rather than trying to hear whether a pair of notes sound like the first two notes of the Star Wars theme so that you can identify them as a perfect fifth.

10. Rinse and Repeat
Never underestimate the power of repetition when it comes to learning guitar, or any musical instrument for that matter. From the tiniest movement to sections of songs or basic techniques, repetition is one of the greatest teachers of all if you focus on the quality of each repetition to arrive at your goal. If you’re not sure whether you’re going in the right direction but you know what you want to achieve, let trial and error be your guide and feel free to make all the mistakes you need to as sometimes trying to get something perfect before you’ve done enough trial and error can lead to frustration.

READ NEXT  3 Music Courses Every Guitarist Should Take

Published in Teach Yourself Guitar