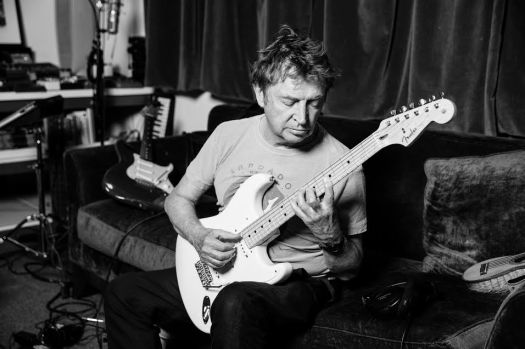 Figuring out the modes on guitar is a bitch. I remember it took me a while grasp the incredibly simple essence of it because I was thinking way too much. Once I had chillaxed it all became clear and disturbingly simple. Looking back on that epiphany, I put the months of struggle beforehand down to not being able to see the wood for the trees, i.e. there was too much other crap impeding my path to the holy grail of guitar improvisation; so now, and due to the fantastic benefit of hindsight, I’ll try to help you avoid months or even years of tawdry mode explanations and YouTube trawling.

Bassists Get It but Guitarists Don’t
This is an interesting phenomenon as the best person to ask for an explanation of modes is probably a bass player; they just seem to get it much quicker than guitarists do. I think this is because they have little or no ‘scale clutter’ to try to apply modes to, which is the biggest mistake guitarists make. Let me explain… Bassists have no CAGED system, and if you’re trying to apply modes via the CAGED system you’re going to end up desecrating your guitar, as well as whoever taught you the CAGED system.

Let’s say you want to play the E Phrygian mode. This is your thought process using the CAGED system:

If you want to play E Phrygian on bass you just play the E Phrygian scale, starting on E. Genius.

More Scale Clutter
If you’re using the 3NPS scale system then you’ll have the same problem, albeit with a shorter route to what you actually want to play. Check out the first 3NPS pattern in F below.

If you start the scale from the G and finish on the G an octave higher you’ll get G Dorian. It should dawn on you that F major and G Dorian contain exactly the same notes—with this revelation you’re halfway to understanding the modes. Make sure you play a G minor chord before you start noodling in order to hear the mode rather than some wishy-washy major scale-ish sound; your ear must believe that G is the new root. If you continue on in this fashion you’ll get the following scales: A Phrygian, Bb Lydian, C Mixolydian, D Aeolian, E Locrian and back to F Major (Ionian).

The Missing Link
What most guitarists don’t do is take the time to actually hear the sound of each mode. This is critical as to be able to pick them out of the generic major scale pattern, your ear will need to be involved otherwise every mode will sound the same to you.

In the following diagrams use the bottom E string as a drone and play through the scale patterns for each mode paying close attention to the sound of the notes.

The Ionian mode is just another name for the major scale so you can probably skip this one.

The Dorian mode is a minor scale and is used a LOT in rock and jazz.

The Phrygian mode is also a minor scale and is again used in rock (metal) and jazz although in jazz it has a different sound due the chords used with it.

The Lydian mode is a major scale with a sexier sound, pretty soon you’ll want to use it instead of the major scale, think, ‘Flying in a Blue Dream’.

The Mixolydian mode is also a major scale, sounds nice over dominant 7 chords, and can be used in a blues.

The Aeolian mode is the go-to minor scale and a staple of the rock power ballad.

The Locrian scale just sounds out and you probably won’t use it that much to begin with but it’ll sound good over a m7b5 chord.

We’re Back
Once you’ve gotten a taste for the sound of each mode we can move on in our quest to understand modes on guitar, and actually be able to use them instead of fumbling around for root notes or engaging in mathematical-like calculations to find the correct mode and starting note.

Circles
If you think of the major scale as if it were circular in nature, as shown in the diagram below, it’s easier to see that any of the notes of the scale can be the root note.

Strum a G minor chord, play the scale from G to G and you’ll get the G Dorian scale. Your ear must believe that the root note has changed for this to sound right. You can start on any of the above notes and go around the circle until you’re back to where you started. A new scale is spawned each time as you can see in the diagram below.

Essentially there isn’t a lot more to modes than this; most guitarists get confused when they try to transfer it to guitar by fitting it into a scale system. This does not work because modes transcend any musical instrument; it’s a music theory concept whereas the detrimental CAGED system is a guitar concept only, and putting the two together is like choosing to have a headache—you just wouldn’t want to do that to yourself.

What about Chords?
Chords work in exactly the same way as you can see below. Start and end a chord sequence on Gm7 and G Dorian will work perfectly over it; start and end your chord progression on Em7b5 and E Locrian will fit perfectly, and so on.

Even a simple chord progression such as BbM7 to C7 will invoke the Lydian mode when you play over it, as long as your root is now Bb, and it’ll fit perfectly. Try another like Gm7 | C7 | Dm7; now your root is G and your mode is G Dorian.

Major=Generic
You should now start to see the major scale as more of a generic pattern that contains its respective modes, unless you’re playing the major scale itself. This is where a lot of guitarists get stuck as they’ve played the major scale pattern so many times in note order that it’s hard to see it from the point of view of a different root.

An alternative would be to have a pattern for each mode. You don’t have to cover the entire fretboard but to be able to use the modes you need to be able to access them on the fly. In the above diagram to play G Dorian you don’t really want to be thinking F major scale starting on the second note. You want to be thinking G Dorian. Over time you’ll be able to see the pattern within in the pattern as it were, but if you want instant gratification then it’s probably better to come up with some strict modal patterns that start on the note of the mode.

Allan Holdsworth sees a major scale, in this case F major, as starting on the lowest available note on the guitar (E), and finishing on the highest available note, which would also be (E), depending on how many frets you have. This is a good way to think about it as you’re not giving priority to any particular root, or being a slave to scale patterns.

If you enjoyed this post and want to gain a thorough understanding of the modes and how to apply them, check out our no-fluff modes book: QuickStart Guides: Modes.