The Most Versatile Yet Underused Picking Technique 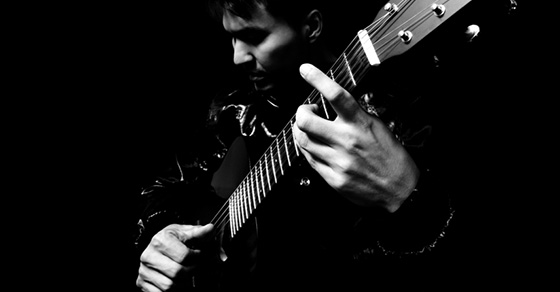 What do Steve Morse, bluegrass and 10-year-old Japanese guitar prodigy Li-Sa-X have in common? The answer is that they’ve all mastered crosspicking, the most versatile picking technique available, yet one that’s barely used outside of the realms of bluegrass guitar playing. For the uninitiated, crosspicking is a form of alternate picking where the path of pick curves in and out of every string, thereby avoiding any unnecessary string-changing mechanics or issues when moving in either direction with the picking hand. It seems like the perfect solution for executing fast alternate picking licks, or even for leaving your picking hand on autopilot while your fretting hand wanders freely around the fretboard, so why isn’t everyone using it?
Apparently, it’s hard.
I think this is somewhat of a myth because unless the first thing you learned was bluegrass guitar, you probably won’t have been exposed to any kind of crosspicking. Learning guitar alongside rock or blues influences will inevitably mean your picking technique will be based around the more standard alternate picking angles, or you may have adopted some form of economy picking, or you may just hack your way through a lick with little or no worry for the finer details of what your picking hand is doing.As you would expect, any and everything to do with picking has already been explored in depth by the excellent Troy Grady. Check out the video below to get an idea of how crosspicking works, although in my opinion it’s probably one of the easiest techniques to grasp once you see how it’s done.
How to Practice Crosspicking
Once you have the basic technique down, you’ll want to practice crosspicking in a variety of situations but especially the ones where, a) it’s most useful and, b) the problem areas you’ll need to iron out to get your picking hand running on autopilot with this technique.Arpeggios. The crossover king of crosspicking has to be Steve Morse. Check out this lesson we did a while back where I was actually talking about crosspicking and how to apply it to arpeggios without knowing it! My original intention with this post was to share an exercise that my first guitar teacher always made me do – now I know why!
READ NEXT  Why Every Guitarist Should Learn Misirlou

Odds and Evens. While alternate picking is a breeze when you have even-numbered note patterns or two notes on a string, odd numbers will throw you off at first because you’ll have to change strings on both upstrokes and downstrokes (the main advantage of crosspicking). I’d suggest practicing any three-note-per-string pattern while you concentrate on keeping the right hand flowing. You can find plenty of practice material in our FREE 3NPS Scales eBook.

Mixing it Up. The versatility of this picking technique comes into its own when you combine patterns with a mixture of odd and even notes such as the CAGED ones – though I’d avoid the standard CAGED patterns in favor of our patterns from Hacking the CAGED System. I think this is what excites me most about this picking technique – the freedom to break out of set patterns or runs on the guitar and really mix things up.

Bluegrass. You could always go right to the source and learn some bluegrass material where you’ll inevitably learn crosspicking as part of the process. I highly recommend Dan Dresnok’s course, ‘Bluegrass for the Curious Guitarist’, which has a 95% discount right now.

Whichever way you decide to go about this, even a little practice will make a difference to your picking abilities, while a lot of practice will give you a whole new (and very versatile) picking technique to add your arsenal!