Playing Covers: Should You Learn the Solo? 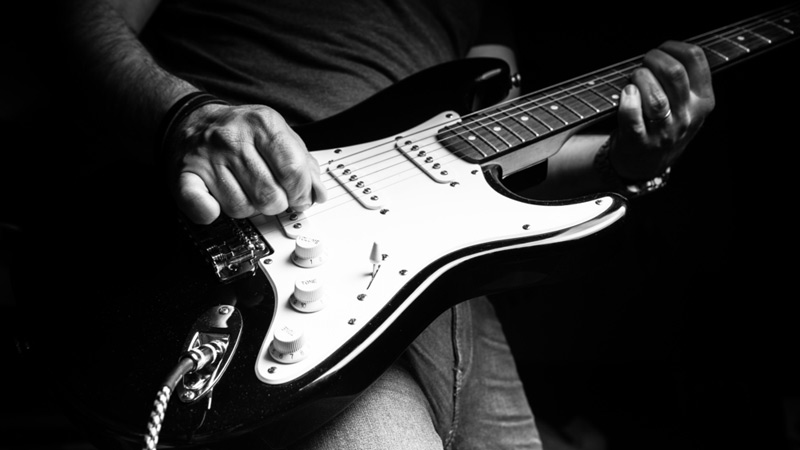 I must admit I’m not a big fan of learning other people’s solos note for note; I get far more out of analyzing them but there are times, especially when you’re playing in a covers band, that you’ll need to step into another guitarists shoes and replicate one of their finest moments. I’m also big on improvisation so being told what to play or having to play a set solo kind of irritates me, but it can be a valuable learning experience. What’s more, if you’re thinking about turning pro then versatility can often make or break your career.

We’ll look at this on a case by case basis using six tunes from a recent classic rock set-list. My criteria when deciding whether or not to learn the solo are the following:

Case 1: You Really Got Me (Van Halen Version)
Van Halen’s heavier version of the Kink’s original features a classic EVH solo with some of his signature moves such as tapping and wide pentatonic bends. It’s one of the less challenging EVH solos to learn and is fairly short though you will need to get the tapping part up to speed (faster if you can) as clean execution is key here.

What I did: I learned the tapping part and made sure I had it up to speed then played something similar when he goes up the dusty end to conclude the solo. The verse fills can also be learned or improvised. This is probably applicable to most VH songs as the solos almost stand out as compositions in their own right.

Verdict: I thought I’d sound lame if I didn’t at least play the tapping part, plus if there are any die-hard EVH fans in the audience, they’ll be expecting to hear it. You could play some A minor pentatonic/blues licks over it as in the original as it’s not technically a VH song, but you’ll feel dirty.

Case 2: Are You Gonna Go My Way? Lenny Kravitz
A definite crowd-pleaser, this was a sensation when it came out back in 1993 and harks back to 70s classic rock. The solo is based on every guitarist’s favorite scale: E minor pentatonic but is more decorative as oppose to being an integral part of the song.

What I did: I learned the first lick and the last lick of the solo and improvised everything in-between as the solo is a little bit shorter than you think.

Verdict: You have free reign here (especially as it’s E minor pentatonic) but don’t get too carried away or you’ll overshoot the end of the solo. It’s a classic song but not a classic solo so no one’s really expecting to hear it played note for note.

Case 3: Smoke on the Water by Deep Purple
Ritchie Blackmore is an incredibly interesting player to analyze, especially his solos. There’s a fantastically seamless interweaving of scales going on which results in very intricate and beautiful lines.

What I did: I listened to Ritchie’s solo a lot and tried come up with similar lines by bringing in G Aeolian and a few passing tones as straight G minor pentatonic licks won’t really cut it here. I’d never tackled the tune before so I learned a lot from the experience.

Verdict: Although learning the solo note for note will be a rewarding experience and certainly enrich your palette for rock soloing, it’s not critical to nailing the song. Moreover, this is the kind of solo that only guitarists would notice and therefore won’t make or break your rendition of the song; just don’t play the riff using barre chords [cringe].

Case 4: Hard to Handle by The Black Crows
This tune is fun to play as there are only a couple of chords and most of the emphasis is on whoever’s singing it. The solo is based on B Dorian/B minor pentatonic and is not overly technical.

What I did: I learned the first lick of the solo then improvised the rest as I’m fairly comfortable with the minor pentatonic/Dorian scales. It’s one of those where you can’t really go wrong with the pentatonics as long as you maintain a bluesy feel and don’t try to cram in too many notes.

Verdict: This is one of those cases where you might want to learn the solo to save yourself the hassle of improvising if you’re unsure about the scales or vice versa: improvise to avoid the hassle of learning the solo. It’s up to you.

Case 5: Sweet Child of Mine by Guns ‘N Roses
If done well, covering this GnR classic can go down really well. The solo is of course a classic in itself but more importantly it’s melodic and is an integral part of the song. When a solo is melodic its absence is a lot more conspicuous especially due to the key change here.

What I would do: I’ve never had the opportunity to play this one live but considering the solo can be whistled by most non-musicians, I think I’d have to suck it up and learn it. My reasoning for this would be: a) It’s melodic and integral to the song b) People are expecting to hear it and c) The gig is at the weekend and I’m not going to come up with anything better.

Verdict: Learn the solo; people will be expecting to hear it. You get more leeway on the second part of the solo and here you could improvise a little but this was one of Slash’s finest hours and you should tip your hat accordingly.

Case 6: Black Dog/Rock and Roll by Led Zeppelin
I’ve lumped these two together as they have similar solos which use the same scales (A major/minor pentatonic/blues scale) and it’s one of those cases where the solo is of secondary importance to the song, and you basically have free reign.

What I did: If you’re fairly adept with the above-mentioned scales then you should have no trouble here. The only thing I would advise against (in Rock and Roll) is overplaying. The tempo is quite fast and a guitarist’s knee-jerk reaction is to play a lot of notes but it’s not necessary here.

There are no hard and fast rules as to when you should learn the solo but the above criteria should help you to make a good decision, bearing in mind the all-important factor: your audience.