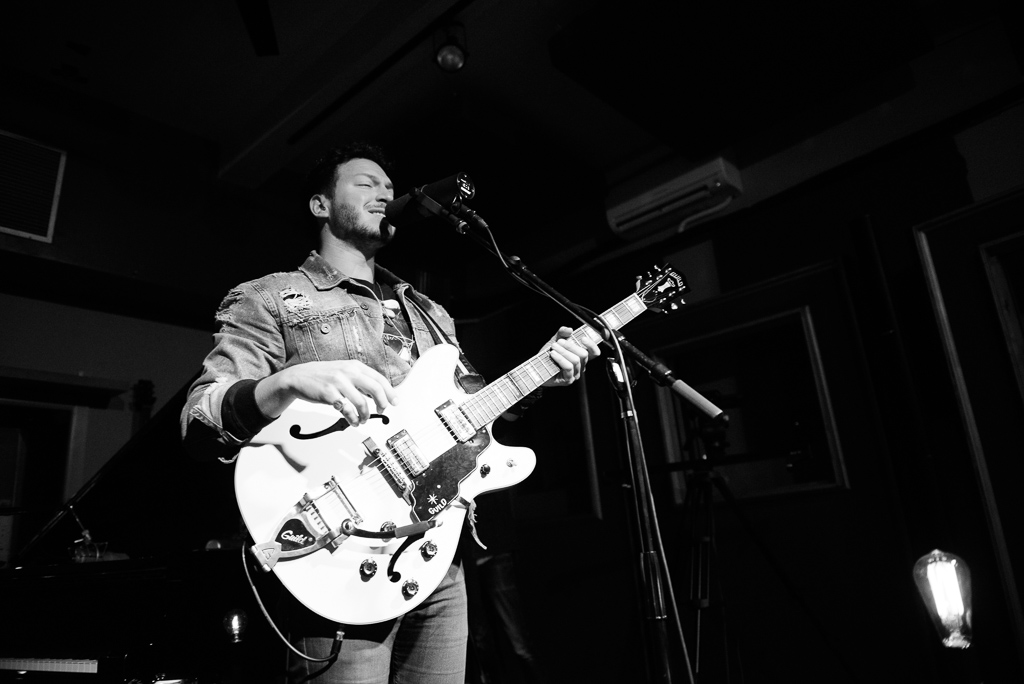 Stage fright; noun
1. Nervousness felt by a performer or speaker when appearing before an audience.

Scientific research into stage fright seems to suggest it stems from the ‘fight or flight’ evolutionary mechanism in the brain. When we feel threatened we either stay and fight or run for the hills; stage fright sufferers usually want to opt for the latter but what could cause you to suddenly doubt your very existence and worthiness as a guitar player? To a certain extent everyone cares about what people think of them, especially when it comes to guitar players. Caring a little too much only heightens the stakes causing more adrenalin to be produced and in turn more anxiety and stage fright, and although your reputation probably isn’t on the line, taking care of it certainly plays a part.

How to reduce stage fright
The rehearsal is a great opportunity to reduce or eliminate any anxiety that may rear its ugly head when you get on stage. It sounds obvious but make sure you know your parts, progressions and soloing strategies to the point where you can play them without thinking too much. The better you know something, the less anxiety it will cause. Make sure you iron out any band issues such as timing, the order of the setlist, ending songs etc. All these little things go toward increasing the overall confidence of the group. A positive outlook is critical as whatever you think about you’ll attract, so constantly thinking things are going to go wrong will only increase the possibility of that very thing happening. It’s important not to suppress these thoughts either though as this only has the opposite effect. Instead try to replace them with images of things going well.

Does alcohol help?
Consciously using alcohol to suppress stage fright is probably not a good idea as you’re creating a dependency rather than dealing with the fear on your own terms. There’s nothing wrong with drinking the odd beer, or those they’re paying you with, while playing as long as you haven’t created the necessity of being half-gone to be able to perform.

Is stage fright such a bad thing?
The good news is that a lot of experts think that a little stage fright is a good thing as it produces the adrenalin and energy necessary to perform. If you take measures to eradicate anxiety such as alcohol or pills like beta-blockers (these reduce your heart rate) you’re actually impairing your performance as you just end up feeling tired and uninspired. The best thing to do it would seem is to embrace stage fright, and I have a theory that the effects of stage fright can be lessened by realizing the following: the present moment is where it’s at as far as being on stage is concerned. Try to forget about the past (things that went wrong) and also try to disregard the future (things that could go wrong) and simply enjoy the present. If you can get your head around this, and into the present moment, it’s a great way to deal with stage fright. When you feel your mind wandering off into stage fright territory simply bring your focus back to the present moment, to the things around you, the sights, smells and so forth; this will help you to relax.

Play through it
When I was an incredibly naive young(er) guitarist I never gave a second thought to being nervous on stage and just went out and played. It was probably the sheer naivety that got me through but as you mature you become more aware of how good you are in the scheme of things and this is where doubt starts to creep in. I ended up suffering from mild stage fright and what I used to do (and still do to a certain extent) to combat it was to get up on stage about twenty minutes before everyone else and play (not too loudly) while pretending to be fiddling with some cables or sound presets on my pedal board or amp. I found this would kill about 80% of my nervousness and leave me feeling still anxious but kind of excited at the same time, which was a far more manageable feeling and would only last for the first couple of songs.

Nothing to prove
I’ve also discovered over the years that trying to prove yourself in a live situation or going in with that kind of attitude actually holds you back and creates unnecessary stress. Once I let this go and saw things more from the point of view that I was going to share whatever talent I have with an audience to entertain them (without the ego), I developed a whole new attitude towards playing live.

Finally, I would recommend making eye contact with the audience. It’s probably the last thing you’ll want to do but it can be surprisingly reassuring to look up and see friendly faces and not the impenetrable wall of critics you imagined were sitting in front of you.