How to Solo Over Chord Changes (Part 5) 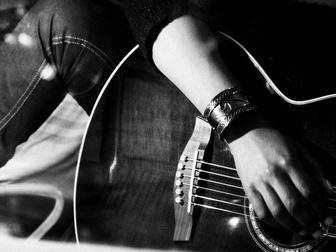 So far, we’ve looked at our core intervals, the 1, 3, and 7 (plus the b3 and b7), the 5 and the natural 6. Let’s turn our attention to the 9; the 9 is the same as the 2 but it’s almost always referred to as the 9, b9 or #9 when we talk about chords. This is not true when it comes to scales, which are mostly spelt in number order when referring to their interval structure. Hook your looper pedal up and let’s check it out…

Yes, the 2 and the 9 are the same interval/note; it’s just not obvious when you’re thinking from the point of view of scales, and a lot of players don’t tend to see this until it’s pointed out.

If you know this pattern, you’ve gotten your way into playing over a dominant 9 chord.

You identify the base pattern according to the chord, then add in the other chord tones. You already know where the 5 is, so load up your looper with an A9 chord and practice with the chord tones. If you’ve been working steadily through this series, you should be finding that you need a hell of a lot fewer notes than you did with scales. Remember: your approach should always be to try to find the intervals you want to play when improvising, NOT learn a pattern then try to play it. This not only sounds lame, but you may as well be playing scales.

How Chords Are Made vs. How Scales Are Made
As I mentioned briefly above, here’s where the confusion starts. Diatonic chords (chords belonging to a key) are made by adding intervals/notes in thirds. For example, our basic dominant 7 chord contains the intervals 1, 3, 5, and b7, but we can add a 9 to get a dominant 9 chord, a 9 and an 11 to get a dominant 11 chord, and even a 13 to get, you guessed it, a dominant 13 chord.

You’ll see that a mixolydian scale actually contains all the chord tones of a dominant 13 chord if you write it out as follows:

What I want you to see here is that scales do perform the same the function as adding chord tones, but the process gets somewhat lost in translation. In ripping a mixolydian scale over a dominant 13 chord, you skate over all the interesting details you hear when you take the time to do it interval by interval and realize what you’re playing.

Back to 9s
Once you realize that the 9 is the same as the 2, and can always be found 2 frets above the root note, you’re ready to modify it.

The only real technical difference between a 9 and a 2 is the distance from the root. The 2 is right next to the root while the 9 is in the next octave. For practical purposes, they will provide you with the same note.

You’ve probably come across the 7#9 or ‘Hendrix’ chord in tunes like Purple Haze and Foxey Lady, among others. Hendrix didn’t invent this chord of course but used it to great effect in his compositions. If we analyze an E7#9 chord, it’s made up of the following intervals:1, 3, 5, b7, #9

It creates tension because it really has both thirds in it; remember a #9 gives the same note as a b3, just an octave higher, so you have the major and minor third in the same chord. To improvise over this chord, record an A7#9 chord, take the following base pattern and add in the 5 and #9, which you can locate by shifting the 9 up one fret.

In Part 6, we’ll look at more upper extensions and how to incorporate them.