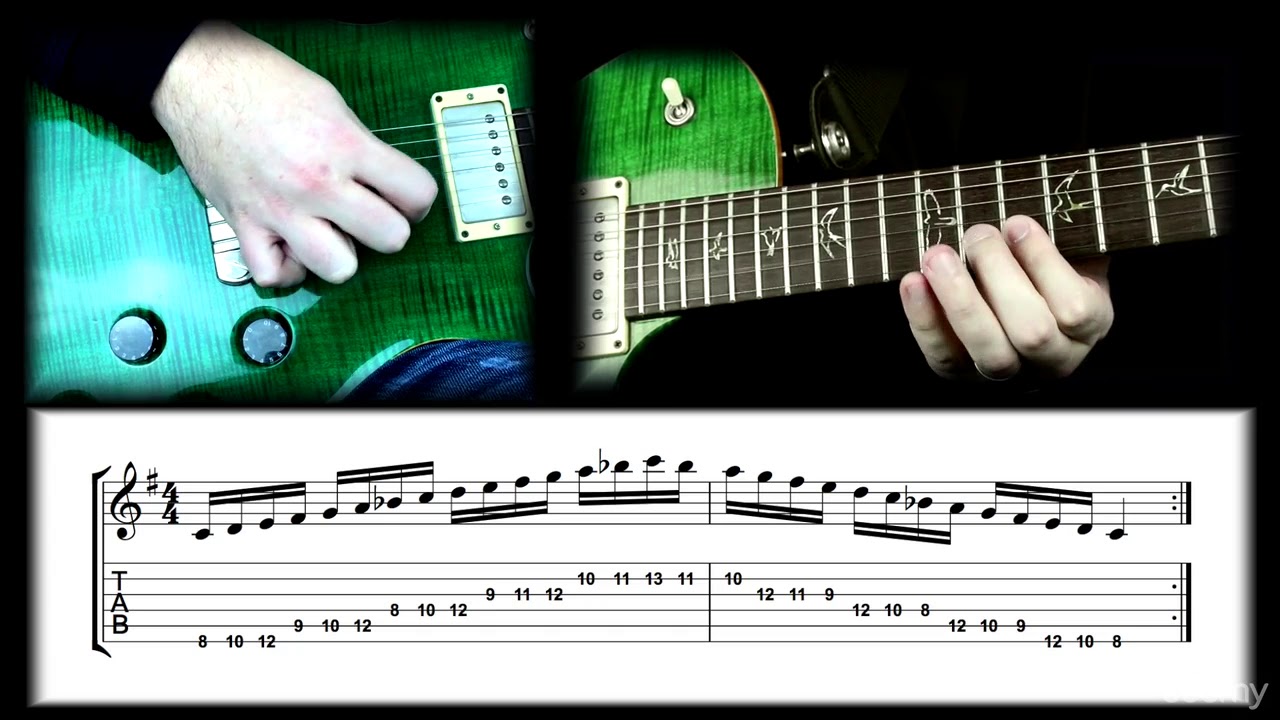 I have to admit it’s been a while since I’ve taken or even reviewed a guitar course but I was intrigued by Tyler Larson’s Guitar Super System course whose premise is to a) provide all the tools for any guitarist wishing to become technically proficient on the instrument and receive world-class instruction in both guitar techniques and music theory, and b) cover the guitar curriculum at the world-renowned (and somewhat expensive) Berklee College of Music. For this Guitar Super System review, we tested out Level 1.

Guitar Super System contains 8 levels with each one corresponding to one semester of guitar instruction at the aforementioned Berklee College of Music which boasts ex-alumni virtuosos such as Steve Vai, John Petrucci, John Scofield, Mike Stern, John Mayer et al. As you would expect, Tyler Larson, the creator of Guitar Super System, is also a Berklee graduate and an accomplished player in his own right. So what can you expect from the course?​

The first level of Guitar Super System, or the first semester at Berklee, covers Scales and Modes, Triads and Four-Part Chords, as well as Arpeggios, plus a ton of extras. The course is delivered via a very user-friendly interface and provides fast and easy access to all the course material such as videos, backing tracks and PDF downloads. The material is well-crafted and professionally delivered by Tyler himself in video and PDF format. The videos are concise and to the point, providing you with an easily understandable explanation of the various concepts, which are reinforced by Tyler playing through the material, then it’s up to you take it away and work on it with the backing tracks and resources provided.

I particularly like the way Tyler covers exactly what you need to know without going into too much detail as at this stage the most important thing is to get this stuff down. His explanation of triads really stands out,as do the backing tracks and PDFs. As mentioned, this course doesn’t weigh you down with a ton of material, but it does more than cover what you need to know, and at the right pace. For the purposes of this Guitar Super System review, I went through the entire course.

The only thing you may get thrown by in this first course is the modes, especially if you’re just beginning to get your head around them.For the modes Tyler brings in the wisdom of Berklee instructor Jon Finn and his method for learning them, which can also be found in this great book on Amazon (a permanent fixture on my bookshelf for the last decade) though as Tyler points out, at this stage just getting the basic major scale patterns down is what really matters.

What you’re working through here is the tried and tested Berklee guitar syllabus, so you don’t have to worry about whether it works or wonder if it’s just a bunch of stuff thrown together that you could find on YouTube for free; in fact, the syllabus found here is common to guitar courses in most of the well-known Music Colleges.

What about Music College?

It’s interesting, the first thing that came to mind as I worked through the course was, ‘I wish I’d had this course before I went to Music College’, which is slightly ironic as Music College is the place to go to learn this stuff, right? Yes and no; of course, you can learn this stuff in Music College, it’s all on the syllabus but if you’ve been playing guitar for a while you’ll know that these things take time to become internalized and show up in your playing. Ideally you don’t want to be learning this stuff at Music College, you want to be using it there. When I went to the ACM in Guildford in the UK back in the early 2000s (more on that here) I had a vague idea of this stuff but I didn’t have it down cold, and so had to spend a lot of time honing it instead of using it i.e. I couldn’t take as much advantage of what the place had to offer in terms of live playing, networking, auditions and really putting this stuff into practice as I would have been able to with this stuff already under my belt; for this reason alone, Guitar Super System is worth its weight in gold.

Who is Guitar Super System for?

Guitar Super System is aimed at those who have the desire to pursue a career as a professional guitarist and provides all the information you need to reach that goal. Of course, it’s not absolutely essential to go to Music College in order to have a career as a musician, especially if it’s not viable financially-speaking, but what you have here is the exact same information for a fraction of the price. I was lucky enough to go to Music College (thanks Dad), but if I hadn’t been able to, this course would have been a great option. Make no mistake, you’ll need to put the work in; Tyler won’t spoon-feed it to you and this isn’t one of those gimmicky short-cut-to-guitar-glory courses (thank God), but you’ll definitely get out of it what you put into it. The course is not aimed at absolute beginners so make sure you’ve got a few years of playing under your belt before taking the plunge.

If you just want to learn covers and your favorite players’ licks and runs then Guitar Super System is probably not for you, that’s what YouTube’s for 😉 On the other hand, if you want to learn how to come up with your own licks and runs, get proficient on the guitar to be able to play in a variety of situations, genres, styles, and even make a career out of it then this course could be just what you’re looking for.

What about the Competition?

As far as all-in-one guitar courses go, Guitar Super System’s competition comes in the form of: Complete Guitar System – Beginner to Advanced and The Professional Guitar Masterclass over at Udemy and usually have a major discount off the real price.

There’s also the excellent How to Play Guitar course offered by Berklee themselves over on Coursera – well worth checking out.

You could also check out our own Hacking the CAGED System series, which features a simple method to learn chords, scales, arpeggios, modes and key signatures

About Tyler Larson
Tyler resides in Asheville, NC and is the COO at a holding company called MindFire where he creates and sustains a variety of profitable projects, including Guitar Super System and his own production music library, among others. Tyler has been playing guitar for over 14 years and teaching for over five years and has his B.A. from Berklee College of Music.