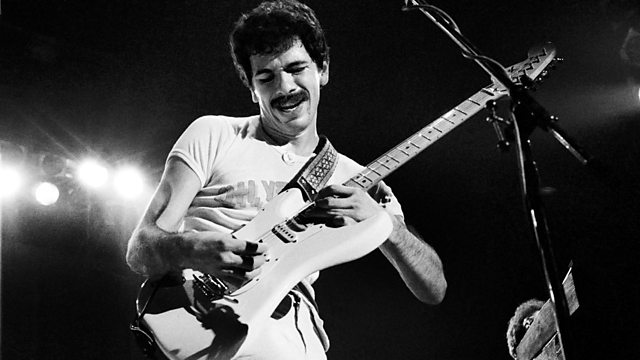 I’m not a big fan of learning famous guitar players’ licks note for note as the time you need to put into achieving such endeavors far outweighs the usefulness of the result, and unless you’re in some kind of tribute band, there are probably more productive things to do with your time. Personally, I’d rather sit down and try to work out exactly what a guitarist is doing theory-wise, and then try to incorporate that into my playing. I probably couldn’t play a Carlos Santana lick to save my life, but I do get a lot out of watching and listening to him play. So, what exactly is he doing scale-wise? If you watch his hands it seems like he’s playing Pentatonic, Aeolian and Dorian scales most of the time but he’s actually got his own little twist on them.

Let’s take a Cm or Cm7 chord and see how Santana would approach soloing over them.

Your first port of call over either of these chords would probably be C Minor Pentatonic, C Dorian or C Aeolian but Santana goes for something slightly different. There are a couple of ways you could think about this:

Look at the following fretboard diagram. The red and blue notes combined make up G Minor Pentatonic (G to G) but the blue notes are actually the Egyptian Pentatonic (C to C).

Try it out. Have someone play a Cm or Cm7 chord for you and play G Minor Pentatonic over it. Bear in mind you won’t be able to play a lot of your stock pentatonic licks as they won’t quite fit, but once you get used to it you’ll be able to bring out that Santana-ish sound.

What’s going on here?
If we take a look at the intervals of the resulting scale: 1, 2, 4, 5, b7, there’s no minor 3rd in there which means you’re emphasizing the 2 (or 9) which is where that sound comes from. Not having a minor 3rd also gives it a looser, more unresolved feel.