Spice Up Your Soloing with the Finger Roll 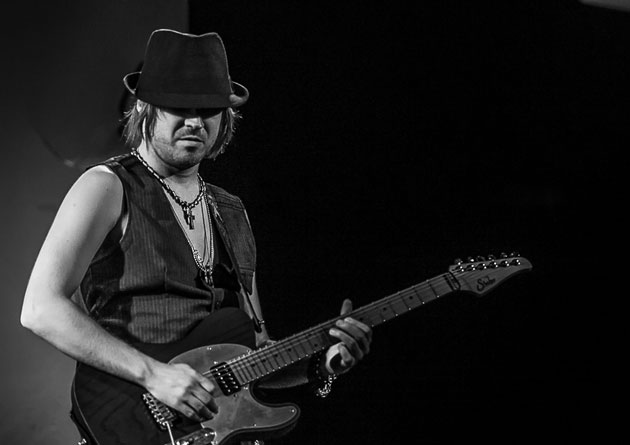 If you’ve learned your scales and they’ve ended up sounding like… scales, there are a number of things you can do to make them sound less like exercises you spent months, perhaps years, woodshedding. When we improvise from a scalar point of view we tend to take the path of least resistance, which in guitar scale terms would be finding the easiest fingering to get from one end of the scale to the other. This is where the finger roll comes in! My first guitar teacher would make me do a lot of exercises that involved the finger roll, which I couldn’t appreciate at the time, but due to the benefit of hindsight I can now see how useful they were.

What is a Finger Roll?
A finger roll is when you play two or three notes on two or three adjacent strings with the same finger by rolling that finger across the strings so that they sound as single notes. The finger roll technique is highly beneficial to your playing because it gives you more directional options when soloing, as well as discouraging you from playing very linear lines and runs. This is especially useful with scales such as the good old minor pentatonic which sounds much less cliché when you begin to incorporate the finger roll technique. Check out the G Minor Pentatonic Scale below with various finger roll areas marked in red and blue.

As you can see, any two or three adjacent notes can be finger-rolled, and as the name of the technique suggests simply roll your finger over the two or three notes sounding each one separately, almost like slow-motion sweep-picking. As you roll your finger to play the next note, it should also damp the first one. To really make the most of this technique, make sure you can do it with each of your fingers, even your pinky.

Here’s a G Major Scale pattern which provides a lot of scope for finger-rolling.

These are just a few ideas to get you started, so feel free to find finger rolls that you like the sound of and start to combine them with your more linear licks and runs.

Here are a few more scales to practice on: G Harmonic Minor;

Again, make sure you give each of your fingers a workout on this exercise as this is a very useful technique to have under your belt.