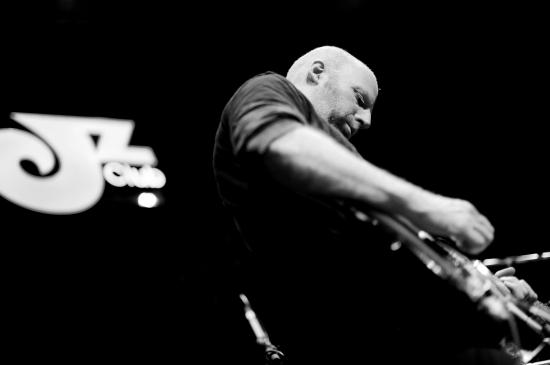 I love outside playing, the more outrageous the better. I think it was Allan Holdsworth who called it, ‘playing all the rude notes’, and he was definitely right. These are the notes that stick out like a sore thumb but in a good way, if you handle them right. There are many approaches to playing outside the lines, but the one we’re going to look at here is an especially friendly one; it allows you to stray quite far out but provides the greatest safety net of them all: the pentatonic scale. Let’s check it out.

Guitarist Issues
The two main problems I see when guitarists start playing outside tones are a) their reaction to the sound of the ‘out’ notes, and b) being forced out of a comfortable hand position. If you take a 5-note scale, you’re led to believe that these are the five good or ‘in’ notes while the rest are to be avoided, or added sparingly. In the same way, a 7-note scale contains 7 ‘in’ notes and 5 ‘not-so-in’ notes that are usually avoided at all costs. When guitarists first start straying outside the comfortable boxes, they kind of wince when they hit those ‘not-so-in’ notes which causes them to sound like clangers rather than tastefully-placed dissonance, and this is also a key factor: any note that grooves won’t sound wrong, as we saw in this post on Victor Wooten’s practicing philosophy. What I like about his approach to improvising is that he encourages you to get comfortable with the other 5 or 7 notes in the scale so that you can use them all confidently. While this is a great idea in theory, it requires building up to because if you start to blow over some kind of C chord with the chromatic scale below, it’s going to sound fairly ‘headphones only’ for a while.

This is where the good ol’ minor pentatonic scale comes in to solve the hand position problem. When you start to play outside stuff, you don’t want to move your hand into any uncomfortable or new position as this in combination with the need to resolve to an ‘in’ note will throw you off too much.

Coloring In
Here’s the classic E minor pentatonic box at the 12th fret. To get some outside tones in there, all we do is ‘color it in’ as follows.

If you’re using one finger per fret, you shouldn’t need to move your hand at all to incorporate all those glorious outside/passing tones. Even if you’re using your first and third fingers to play this box, the hand movement is minimal, and more importantly, not enough to throw you off. The great thing about this idea is that you instinctively know how to resolve those outside tones because your hand knows instinctively where the ‘inside’ tones are as it doesn’t have to move. What you can also do here is start out using the blue notes as passing tones, then gradually bring them into your normal pentatonic licks. Try it out over this backing track which alternates between an Em and an E7#9 chord.

This also works with any of the other pentatonic shapes, so feel free to experiment with those too. Simply fill in the gaps between the scale notes and you won’t have to move your hand. The hand position acts as an anchor that you can use to ‘reel in’ any outside excursions.

Published in Outside Playing Pentatonics