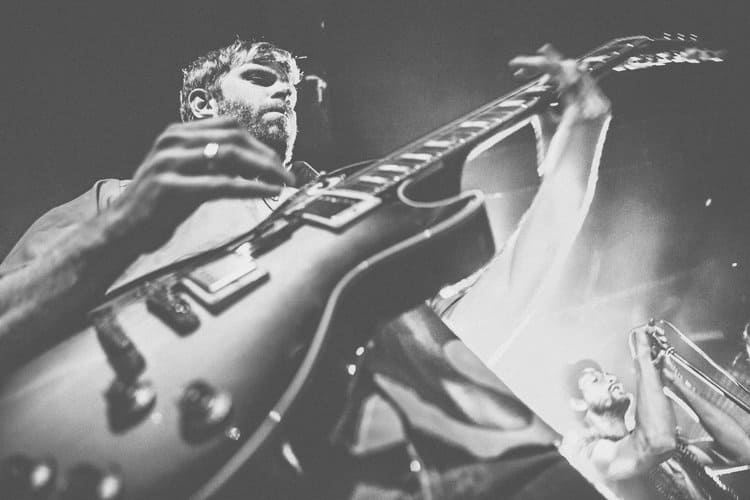 I decided to go to Music College back in the early 2000s, to the ACM in the UK to be precise, on the advice of a couple of friends who’d already been there and loved the experience. Plus, the thought of being taught by the players such as Guthrie Govan, Dave Kilminster, Pete Callard, Pete Friesen, Jamie Humphries and Eric Roche was enticing to say the least. I’d only been playing around for around five years or so, but I’d made good progress—probably due to playing with friends that were way better than me for so long, long enough to suck it up and see it as ‘fast-track’ learning anyway. The ACM, of course, meant a whole new level of sucking it up, and my first forays into actually having to practice the instrument.

I was mainly self-taught right from when I first picked up a guitar but had started taking lessons around 6 months before going to the ACM. As you would expect, I had some huge holes in my playing, but it seemed that by and large I’d been doing a pretty good job of teaching myself. Music College, however, was another level entirely and required a more academic approach. I needed to absorb an incredible amount of information in a short period of time, as well as incorporate it into my playing.

It’s Not Fun Anymore
The first thing I realized was that it started to feel like work. We were given this inch-thick binder of arpeggios, chords, scales, reading exercises and theory to work from, and as much as I loved learning guitar, this was just depressing. It was like knowing how much stuff I had to learn and realizing how long it would take. This is exactly what you don’t want because once you realize how much stuff there is to learn, it just makes you feel like giving up unless you’re some kind of masochist.

Tip #1 – Avoid big binders of stuff to learn. They take all the fun, discovery, and more importantly the naivety, out of learning guitar. If every guitar came with an inch-thick instruction manual, no one would buy one.

I think I just ended up carrying that binder around for show, but it did have one redeeming feature:

Organization Is Key
The thing I liked about the binder was that it was organized into different sections. I remembered watching John Petrucci’s ‘Rock Discipline’ video where he talks about organizing your practice material into different sections such as scales, chords, arpeggios, reading etc., then choosing an area to work on instead of opening a huge tome only to close it five minutes later when the depression sets in. So I went and bought some folders for each section and organized my practice material into smaller sections or chunks, which made me a lot happier.

Tip #2 – Organize your practice material into sections and choose which area to work on every time you go to practice. Have the material in printed physical form so that you’re not distracted by the internet.

During the pre-internet guitar-learning age it was common to physically have the material you were working from, be it a photocopy of some crudely drawn fretboard diagrams, or a guitar magazine with tabs and lessons. If you were born connected to the internet, I’d still recommend printing out all your practice material as sitting in front of an internet-related device presents way too many distractions, which brings me to my next point…

Concentration is King
If organization is key, then concentration is king. If your practice sessions are unproductive, 99% of the time it’s due to the fact that your concentration is either poor or non-existent. Concentration is like an opening through which information and understanding flow into your brain. If you lack concentration, then that opening will be very small, and virtually nothing will get through. You may have heard musicians comparing music to languages, which it is to a certain extent, and having been a language teacher for many years I can tell you that ineffective ways of learning languages have parallels with ineffective ways of learning music. Students would often ask me why they couldn’t understand spoken speech, even after many years of hearing or listening to a language. I discovered that it was due to their lack of concentration, and by working on exercises to extend the time they were able to concentrate, they began to understand their target language—and without learning any new vocabulary or structures. In other words, they opened up the channel for the information to flow in and be processed, rather than doing the equivalent with their ears of squinting with your eyes in order to see something.

How does this relate to learning guitar? You must be able to fully concentrate on what you’re doing in order to absorb what you’re trying to learn. You can test how well you can concentrate by watching or listening to something that is timed, and then marking the point where you lose concentration, or your mind wanders off. For some people this is a matter of minutes, while others can concentrate for longer periods. I believe this to be one of the fundamental things that separates amazing players from the rest as being able to concentrate for extreme amounts of time would allow you to absorb incredible amounts of information.

Tip #3 – Use printed material to avoid internet-related distractions (if you’re using YouTube or something similar then close all other windows or apps) and test your concentration level. If you discover it to be low, then work on extending it by watching or listening to something and marking the point where your concentration goes. Try to extend this amount of time and you’ll soon find that you absorb and process information much more readily.

Concentration is the doorway to another powerful state of mind for learning and absorbing information:

Concentration Leads to Flow
I think everyone knows this state; it’s the one where you’re so completely absorbed in something that you lose all track of time. You probably experienced it far more when you played as a child, and perhaps when you first started playing guitar. This is a far more useful state of mind for learning than the ‘studying’ one where you’re working through material for the sake of it. Once you see the contrast between these two states, you’ll realize that hours of rote, mechanical learning of say, arpeggio patterns, is a poor investment of your practice time.

Tip #4 – One of the goals of your practice session should be to get absorbed in whatever you’re practicing by reaching the flow state through concentration; this is where intense learning takes place.

This was the process I unconsciously adopted when I started playing guitar. Music College kind of threw a spanner in the works as it brought in that stressful, academic side to learning, but these are the steps I use to this day whenever I go to ‘practice’ guitar.